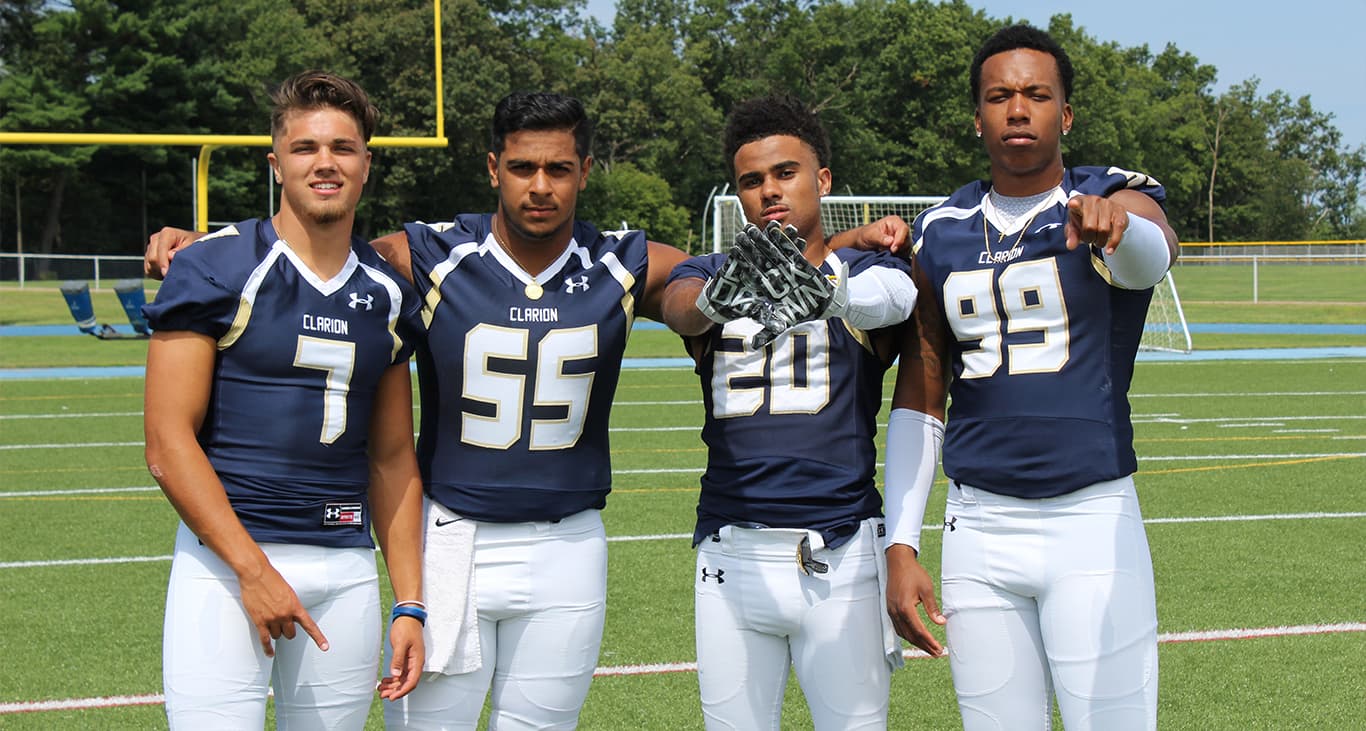 What does it mean to be a “real man”? It means speaking and living your truth, whatever that may be. But that’s far easier said than done in a culture where men feel pressured to adhere to outdated and damaging stereotypes of masculinity.

Despite how far we’ve come in dismantling male gender norms over the past decades, men are still expected to act tough and aggressive, and to avoid talking about their emotions or mental health struggles. In a Pew Research Center survey conducted in 2017, respondents were asked which traits society values most in men. They ranked strength, toughness, leadership, and ambition among the top qualities, with respectfulness, kindness, and empathy much farther down the list.

Honesty was at the top of the list. That’s ironic, because men often grow up feeling up that they have to hide their true selves and their true feelings in order to be loved and accepted. Instead of establishing their own version of healthy masculinity, they try to fit into a restrictive mold dictated by society.

Las Vegas Raiders defensive lineman Carl Nassib recently gave the world a powerful example of healthy masculinity and what it looks like to speak your truth. He became the first active NFL player in history to announce that he is gay, in an Instagram post on June 21. “I have agonized over this moment for the last 15 years,” Nassib said. “Only until recently, thanks to my family and friends … did it seem possible for me to say publicly and proudly that I am gay.”

Carl Nassib’s coming out and the support he received from the NFL and his fellow players, along with well-wishers around the world, are proof that norms around gender identity and sexual orientation are changing. However, the fact that he struggled with the decision for so long illustrates the ongoing influence of societal expectations for men, both gay and straight.

These expectations are magnified for male athletes. The locker room is often described as ground zero for toxic masculinity—a culture of homophobia, sexism, and machismo. As retired NFL player Wade Davis, who came out after leaving the sport, puts it, “There’s a certain type of macho that one knows that they have to perform in order to attempt to be accepted.” This locker room culture—which extends far beyond the locker room—is harmful not only for LGBTQ men, but also for straight and cisgender men.

Social conditioning around masculinity is inculcated through parenting and broader social conditioning; peer attitudes and behavior, including bullying; and the influence of media. Data shows that the impact of these male gender norms increases as young men age. A Plan International USA survey asked teen boys aged 14–19 some of the same questions as a Pew survey of adult men. Results included the following:

Interestingly, only about a quarter of the young men in the Pew survey described themselves as “very masculine.” It seems that young men are clear about how society thinks they should act, but they don’t believe they’re fulfilling those expectations. For some, that may be purposeful. For others, it may be a source of shame and insecurity.

35% of male adolescents feel “a lot of pressure” to hide their feelings of sadness or anxiety.

Social conditioning around masculinity negatively impacts gay men as well as their peers. “Every gay man inherits an identity crisis,” writes Gabriel Arana, a contributing editor at The American Prospect and a contributor at Them. “They must reconcile their sense of masculinity with their failure to conform to its compulsory heterosexuality.”

Some gay men choose to eschew male gender norms altogether, but many continue to strive for these traditional ideals in the way they present themselves to the world, writes Arana. In an article for Them, he references a survey of 751 gay men in which the majority of participants wished that their behavior was more masculine, and rated masculinity as important for themselves and in a same-sex partner.

This preoccupation has mental health repercussions for both gay and straight men. Research shows that men who are focused on masculinity—and feel they are falling short of the prescribed standards—are more likely to experience a sense of inferiority, low self-esteem, depression, anxiety, and dissatisfaction with their bodies. For LGBTQ men, who have higher rates of suicidal ideation and attempts, this can be life threatening. That’s why Carl Nassib pledged to do his part “to cultivate a culture that’s accepting and compassionate,” including donating $100,000 to the Trevor Project, which provides suicide prevention services for LGBTQ youth.

In response to the psychological impact of male gender norms and toxic masculinity, the American Psychological Association (APA) spent 15 years drafting a set of guidelines for mental health professionals working with men and boys. In the document, the APA used the term “gender role strain,” defined as “a psychological situation in which gender role demands have negative consequences on the individual or others.” The document identified the ways in which gender role strain negatively impacts male well-being, keeps men from revealing their true selves, and prevents them from accessing mental healthcare.

Essentially, social conditioning around masculinity teaches men to be strong and self-reliant, to avoid intimacy, not to express emotions other than anger, and to manage their problems on their own. As a result, men often find it difficult to share their emotional struggles with friends, family, or healthcare providers. Psychological concerns are equated with shame and weakness, creating intense stigma around both mental health conditions and mental health treatment. Essentially, men are conditioned to suffer in silence.

Consequently, when young men are struggling with trauma, anxiety, depression, grief, or suicidal thoughts, they tend to self-medicate or find other unhealthy coping mechanisms rather than reaching out. Therefore, they are more likely to be diagnosed with substance use disorder or conduct disorder, and to engage in reckless or violent behavior. Because aggression and risk-taking are associated with masculinity, men may feel that these behaviors are acceptable, while talking about what they’re going through and seeking help are not.

When you adhere to masculine norms in rigid ways, it stops you from adapting and coping with your environment. It leads to men not seeking help, self-medicating, committing suicide, abuse in relationships. It’s not the norms that are toxic, but the ways that people adhere to them.

The Link Between Trauma and Ideas of Masculinity

Traditional ideas of masculinity aren’t all bad. Qualities like strength, leadership, ambition, providing for and protecting others, and being good at sports are not toxic in themselves. They can be positive, supportive, and beneficial traits for men and for the people around them.

The problem arises when men are afraid that they aren’t masculine enough—a phenomenon known as “precarious masculinity.” This insecurity can lead to aggressive, domineering, and risky behaviors as men try to prove their manhood. They may also shame and bully other men who don’t fit the traditional masculine mold.

At the root of these behaviors is a lack of self-worth, which often emerges from childhood trauma. Research done with male college students found that young men who had experienced childhood attachment issues with parents or other primary caregivers have higher levels of gender role strain and more difficulties with emotional expression. Men with a secure attachment style struggled less with the concepts of success, power, and competition associated with male gender norms.

1. Acknowledge where you are and where you need to grow. Instead of focusing on regrets for past behavior, let the current moment be your new starting point for being more honest with yourself and others. See if you can identify the triggers that make you feel insecure about your male identity, and find healthy ways to respond to them rather than defaulting to exaggerated displays of masculinity.

2. Start opening up. It takes courage to follow Carl Nassib’s lead and speak your truth, whether that involves coming out or sharing something else that makes you feel exposed and vulnerable. Start by having conversations with people you trust, who will be there for you no matter what. Knowing that even one or two people accept you as your true self can give you the confidence to begin speaking your truth to others.

3. Listen and learn. Along with sharing your truth, ask others to share theirs, particularly people whose gender identities or gender expression are different from yours. How are they living their truth? How can you support them to do so? Do they have practical suggestions for how you can shift your behavior to avoid toxic masculinity? If so, consider them without being defensive.

4. Look within to find your truth. The influence in our society of toxic masculinity and male gender norms is significant. Sometimes men have spent so much of their life hiding their true self that they aren’t sure who they really are without these manufactured attitudes and behaviors. It may take some time and thought to get back in touch with your real feelings, values, and life goals.

5. Push past your resistance to asking for help. For many men, asking for assistance, whether from loved ones or a mental health professional, is the hardest thing of all. Understanding that men have been conditioned in this way can help reduce the stigma. So can self-compassion. Imagine what you would say to a male friend who was struggling with depression and was afraid to talk about it. Surely you would encourage this friend to reach out and access the support he needed rather than suffering alone. Give yourself the same encouragement.

Healthy masculinity goes far beyond a limited set of traits prescribed by society, or by a particular religious or political ideology. It’s unique to each individual, and can encompass qualities that appear to directly oppose traditional male gender norms, like humility, empathy, and vulnerability. “Real men” allow themselves to experience the full spectrum of life and emotions, without hiding how they feel and who they really are.

At Newport Institute, we support young men to overcome gender conditioning and heal childhood trauma and attachment wounds through building authentic connections with themselves, their loved ones, and their greater community. Contact us today to learn more about how out outpatient and residential programs for young men help them grow into strong and compassionate individuals with the courage and confidence to live their truth.