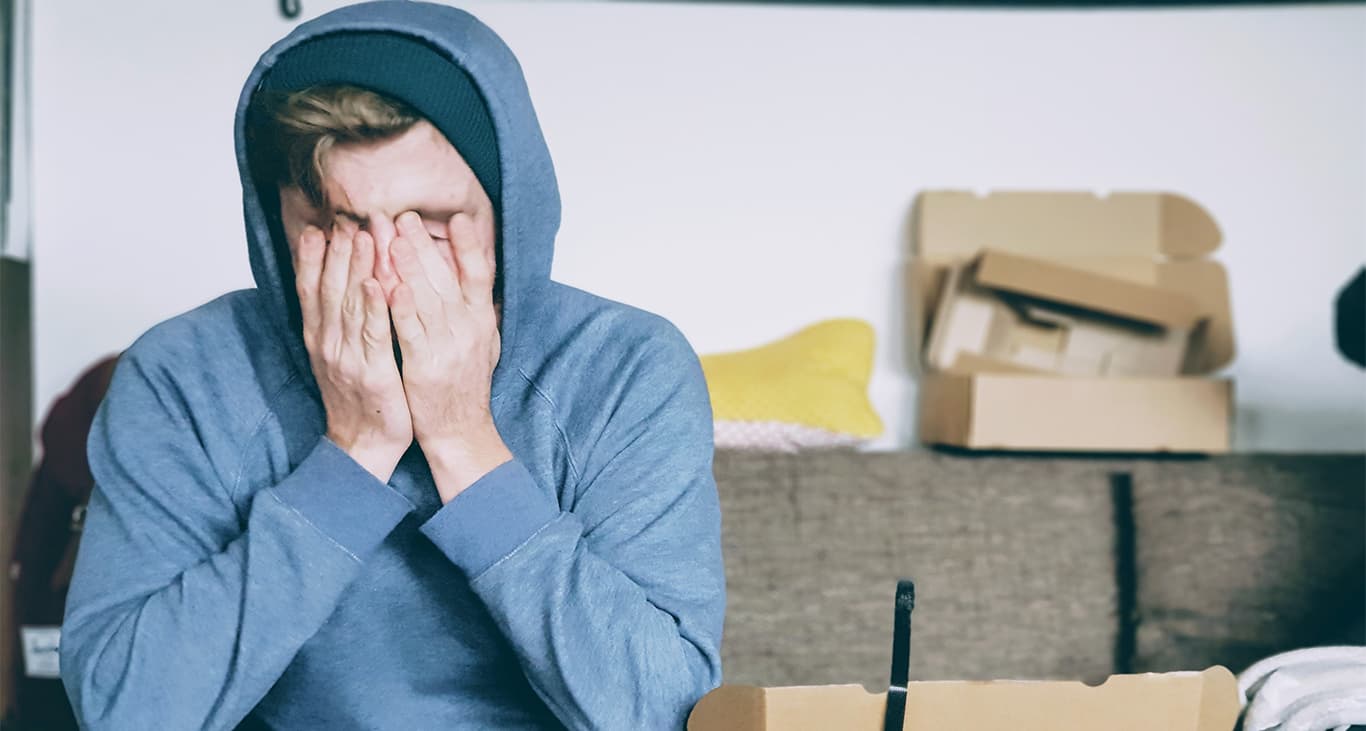 Fear of Adulting: I’m 21 But I Still Don’t Feel Like an Adult

Turning 21 can feel like crossing a line in the sand between adolescence and adulthood. In the United States, turning 21 not only grants young people permission to legally drink and smoke, it also marks the official transition to adulthood, and all the responsibilities and expectations that go along with that. For some young people, that can bring up an intense fear of adulting.

It’s not just young people themselves who recognize the challenges of emerging adulthood. A Pew Research Center survey conducted in late 2021 found that more than 70 percent of Americans think young adults today have a harder time than their parents’ generation when it comes to saving money, paying for college, and buying a home. It’s no wonder that young people are struggling with adulthood.

What Is ‘Fear of Adulting’?

Just because a person has circled the sun a certain number of times doesn’t mean that they’re suddenly gifted with new levels of wisdom and clarity. Plenty (maybe most) young people don’t feel ready to be an adult at 21. They still don’t feel like an adult: They’re not ready to make adult decisions, take care of their own practical needs, or support themselves financially.

In 2022, with young adults suffering from high levels of depression, anxiety, collective trauma, and languishing, it’s natural for them to feel that they’re not prepared for adulthood. “I don’t want to be an adult,” “I don’t know how to adult,” and “I can’t handle adulting” are all common feelings among this age group.

What Does It Mean to Make the Transition to Adulthood?

Traditionally, the young adulthood years have been defined by the achievement of a series of concrete goals: finishing one’s education, leaving home, finding work, finding a life partner, and having children. But many people choose not to pursue one or more of these goals, and that doesn’t mean they’re not ready to be an adult. These parameters for adulthood are too limited and too externally focused to truly describe what it means to become a full-fledged adult.

Researcher and psychology professor Jeffrey Jensen Arnett, PhD, who coined the term emerging adulthood, zeroed in on two criteria that define the internal experience of becoming an adult:

Arnett also noted a third, more tangible, criteria: financial independence. Only when these three criteria were achieved, he wrote, do young people make the transition to adulthood, and this typically happens in a person’s late 20s. Before they reach those goals, emerging adults exist in what Arnett described as an intermediate period between adolescence and adulthood (roughly ages 18 to 25). At this fluid stage, there are many options available to a young person, and their life may undergo many different changes—in areas ranging from identity and worldview to geographic location, friend group, romantic partner, and work.

Emerging adulthood is a time when young people don’t feel totally grown up, but they don’t feel like kids either. In Arnett’s research, the majority of 18- to 25-year-olds (about 60 percent) replied to the question of whether they felt like an adult with an ambiguous answer: in some ways, yes; in other ways, no. In the 26- to 35-year-old group, only about a third said “yes and no,” and that dropped to less than 10 percent for adults over 35.

The high value that Americans place on creating an independent life during the young adulthood years isn’t shared by all cultures. In Italy, Egypt, and the Middle East, for example, it’s accepted and even encouraged for young adults to live at home with parents and perhaps extended family members as well.

In the United States, though, social norms dictate that 20-somethings should be working or pursuing higher education, living on their own, and managing their personal finances and everyday needs, from doing their laundry to doing their taxes. When young adults aren’t able to make that leap into independence within the expected time frame, it’s sometimes called “failure to launch.” Consequently, if emerging adults don’t feel ready to leave home to finish their education or get a job, parents often blame themselves for not properly preparing their child to fly from the nest. Meanwhile, their adult children are ashamed that they’re struggling with adulthood, particularly if they feel they’ve been left behind by their peers.

But the pandemic has given society a new lens through which to view the transition to adulthood. This generation faces enormous pressures, including devastating political and environmental issues, academic pressure, and a pervading sense of loneliness and disconnection, not to mention the psychological repercussions of the past two years. In a world where the path forward is no longer clear or simple, it’s not surprising that 21-year-olds are struggling with adulthood.

The negative view of young adults who, immediately upon reaching legal adulthood, ‘fail’ by not ‘launching’ themselves headlong into the adult world of big decisions, career ambition and complete self-reliance does a terrible disservice to those who more cautiously move out on their own.

In some cases, mental health conditions can slow down the developmental process and make the natural fear of adulting worse. Young adults struggling with trauma, depression, or anxiety may feel they are not prepared for adulthood and its many demands. They may be afraid of making changes, or they might not have the life skills and healthy coping mechanisms to handle the stressors of getting a job and taking care of themselves. Mental health conditions can also hinder the development of executive functioning abilities, which are vital for navigating the world effectively.

Sometimes past history and family dynamics influence whether a young adult feels ready to take on greater independence. Some young people enter a negative holding pattern as teenagers, and aren’t able to break out of it as they age. For example, a young person who dropped out of college and returned home due to mental health concerns might not have had the opportunity to rebuild the confidence and self-esteem needed to make big life changes. Without the internal or external resources to support them in moving into the next stage of growth, they end up feeling stuck and paralyzed.

In addition, the dynamic between parents and children can contribute to a young person’s reluctance or inability to leave home. When children have experienced mental health issues in the past, parents may be particularly protective of and concerned about their emerging adult’s ability to live independently, and may directly or unconsciously communicate that fear and worry to their child. In cases where parents have mental health or substance abuse issues, young adult children may feel that they need to stay close by to take care of them, physically and/or emotionally. This type of codependent relationship can keep young people from taking the next step forward in their lives.

If 21-year-olds are not ready to make adult decisions, does that mean they’re not ready to handle their new status in regard to alcohol? The research on this topic is mixed. Overall, statistics show that drinking declines among those 21 and over, according to the CDC. But that doesn’t mean that this age group is making good decisions about drinking: One study found that even though alcohol intake decreased among legal drinkers aged 21–23, driving after drinking increased.

In addition, one recent study found that the median age when young people begin drinking and using drugs is going up. While that’s good news in terms of adolescent health trends, it means that emerging adults may be at higher risk of abusing alcohol or party drugs.

In fact, Arnett’s research found that emerging adulthood—not adolescence—represents the peak point for risky behavior, including binge drinking, reckless driving, and substance abuse. That’s because 20-somethings have less parental supervision than they did as teenagers, and are not yet constrained by the responsibilities that come with adulthood. But that’s not true for all young adults: a new study found that young people ages 18–29 who self-identify as adults are less likely to engage in risky behaviors.

When young people reach the age where they're getting close to adulthood, or at adulthood, the expectations on them change, and continuing to identify as a child opens the door for continued risky behavior and impulsive teenage behavior.

Struggling with Adulthood? 5 Ways to Cope with Fear of Adulting

Young people figuring out how to get ready for adulthood can begin building skills and self-confidence even if it’s not possible for them to leave home or be financially independent yet. Here are a few tips for those who don’t feel ready to be an adult at 21.

Go toward what sparks your interest. Sometimes not knowing what you want to do in life can prevent you from moving forward. Not everyone has a passion that keeps them on track toward adulthood, and that’s okay. Notice what brings you joy and piques your curiosity, and explore how you might expand on and develop those interests.

Know you’re not alone. Many young adults experience fear of adulting and don’t feel like an adult at 21. Be compassionate with yourself. While there are some things you can change, there are also external circumstances at play that make it harder than ever before for young people to find jobs and become financially independent. While that isn’t a reason to give up and stop trying, recognizing this truth can help young adults stop blaming themselves for taking more time to launch.

Build community. Too often, young adults who are unemployed, not in school, and/or living at home feel embarrassed about their fear of adulting, and that keeps them from reaching out to others—increasing their isolation and distress. It’s essential to foster community and continue developing the relationship skills that will support your growth in all areas. Start with one person you trust and feel safe with, and gradually expand your social circle. These connections will enhance your well-being and may open new doors for you when you’re ready for the next step.

Seek help for emerging adulthood issues that are holding you back. Therapy, outpatient treatment, or residential treatment can help young people overcome trauma, anxiety, depression, or co-occurring disorders, such as substance abuse, that are preventing them from achieving independence. It’s essential to address these issues now rather than hoping they’ll go away as you get older.

How to Get Ready for Adulthood: Finding the Support You Need

Do you or a loved one experience fear of adulting and need help making the transition to adulthood? Newport Institute’s clinical model of care supports young adults to build autonomy and self-worth, along with the executive functioning skills and healthy coping mechanisms they need to flourish. Contact us to learn more about how we help emerging adults take the leap into the next stage of life.