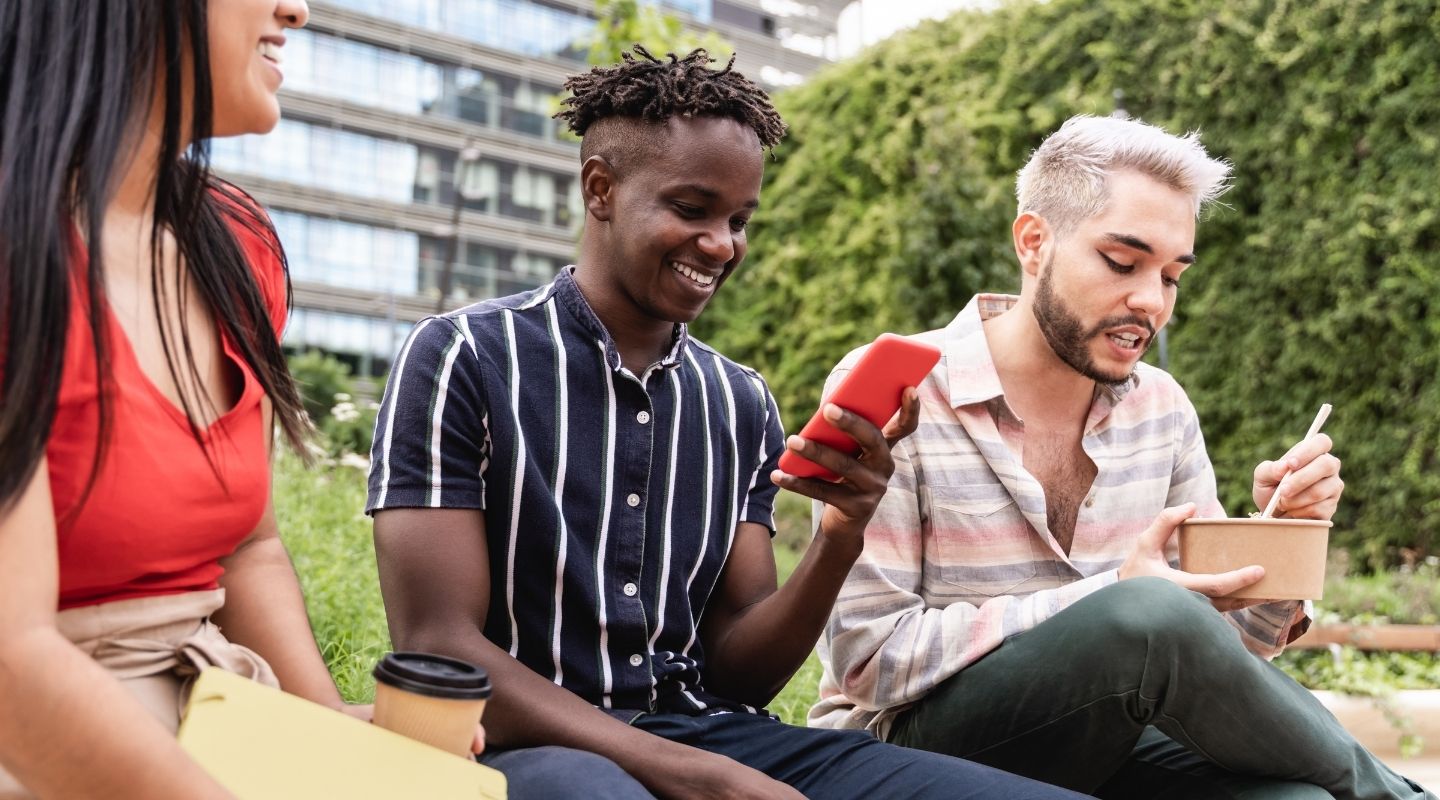 For many young people, checking social media is the first thing they do when they wake up in the morning. And it’s the last thing they do at night. Research shows that 16- to 24-year-olds spend an average of three hours a day using social media. Increasing numbers of people sense that their habits are not healthy for them. But when does social media overuse turn into a true social media addiction? And what can you do to protect yourself from the harmful effects of social media on mental health without missing out on the benefits of the apps?

Social Media Use by Young Adults

According to the Pew Research Center, here are the top social media platforms used by young adults ages 18–29:

Social Media Is Designed to Be Addictive

Why is it so hard to resist checking social media? Social media is designed to keep your attention. These “free” services are not actually free—and the user is not the customer. Rather, the user’s attention is the product. The more of it you provide, the more can be sold to advertisers. Social media addiction is good for a social media company’s bottom line.

Some of the irresistibility of social media is inherent to smartphone technology—it is always close at hand and available. But social media platforms are also deliberately designed to challenge your self-control. Bottomless pages offer no natural stopping points and invite endless scrolling. Persistent cues, such as notifications and reminders, grab our attention when it drifts. Some features (bright colors, stimulating rings and dings) mimic the hypnotic flow of slot machines, by design an especially profitable mode for casinos.

But perhaps the most powerful force behind social media addiction is its appeal to our innate social instincts.

While there is nothing inherently addictive about smartphones themselves, the true drivers of our attachments to these devices are the hyper-social environments they provide.

Humans have survived as long as we have thanks to our instinct for social behavior. Experts theorize that our brains have evolved to reward social interactions with the release of particular neurochemicals. Chief among these is dopamine, released in response to activities our survival-oriented “primitive brain” deems beneficial, such as eating, sex, or exercise. Dopamine’s neural pathways are central to learning, habit formation, and addiction. Brain imaging shows that the dopamine reward circuits are also activated in response to addictive substances, such as cocaine and sugar. It is now clear that behaviors can trigger the same neural pathways as addictive substances.

Small, frequent, and unpredictable rewards with low investment (sometimes known as the “slot machine effect”) are the most effective form of habit reinforcement. Such rewards have been built into social media functions, keeping the user engaged for longer. Not only that, but our dopamine levels increase with just the anticipation of a potential reward. So checking our social media feeds to see what’s new or how many likes we have can easily become a dopamine-driven compulsion.

Social media’s appeal to our deep-seated social needs and anxieties helps explain how social media is addictive. Friends and followers, likes and “streaks,” satisfy our need not just for approval from others (validation), but also the equally compelling desire to offer it to others (reciprocity). But how do these virtual social “fixes” compare with real life social interactions? More and more people are finding them a hollow, if not downright dangerous, substitute. Study after study has investigated the link between social media and mental health effects, including increased anxiety, depression, and loneliness. Since 2020 there has been a 12 percent rise in people saying they use social media less than they used to.

In America, Gen Z stands out for saying social platforms are good for society and help them
feel connected to others; but also for believing there’s too much pressure to be perfect in this space, and that it causes them anxiety.

A score of  4 or 5 (“often” or “very often”) on at least 4 of those statements could indicate a social media addiction.

Many of the detrimental social media effects on mental health for today’s young adults, the first generation of digital natives, reflect habits they may have developed as teenagers. Adolescents are the age group at greatest risk of developing social media addiction, due to their ongoing brain development and identity formation. Some of these effects are connected to the way social media takes advantage of our innate social instincts. But other effects are simply the result of the fragmentation of our attention and the over-investment of time in social media at the expense of other activities. These effects include:

Addiction is defined by the American Society of Addiction Medicine as “the use of substances or behaviors that becomes compulsive and continues despite harmful consequences.” Experts debate the distinction between social media addiction versus problematic overuse. But some estimate that between 5 and 10 percent of social media users are addicted. Why do some people find themselves unable to resist being drawn in by social media while others do not?

The inability to move flexibility between emotional states is a hallmark of a number of mental health disorders, including addictions. Young adults commonly face increased stressors with fewer supports as they launch into adulthood, challenging their emotion regulation skills and putting them at risk for forming an addiction.

Mental health experts believe that shame—a feeling of self-hatred and fear of social rejection—is at the root of addictions of any kind, whether to a substance or a behavior. Social media directly plays into such insecurities by directly appealing to our innate psychological need for a sense of belonging.

A digital detox can be an effective way to curb habits that can be the precursor to social media addiction. While complete abstinence can cause distress, research has shown that even a week of cutting back to 10 minutes per platform per day results in a greater sense of well-being. Moreover, reducing use also raises awareness of your habits and the effect they’re having. And a few simple steps can lead to permanent reductions in social media usage without a noticeable impact on your sense of connectedness. Try turning off notifications or keeping your phone out of reach at night.

If you suspect that you or someone you love has a social media addiction related to underlying mental health issues, Newport Institute can help. Our approach to healthy device management reveals and heals the root causes of behavioral addictions and other co-occurring issues, like substance abuse and eating disorders. Contact us to discover a path to healing. We are dedicated to helping young people get back on track toward a healthy, fulfilling, and balanced life.

All calls are always confidential