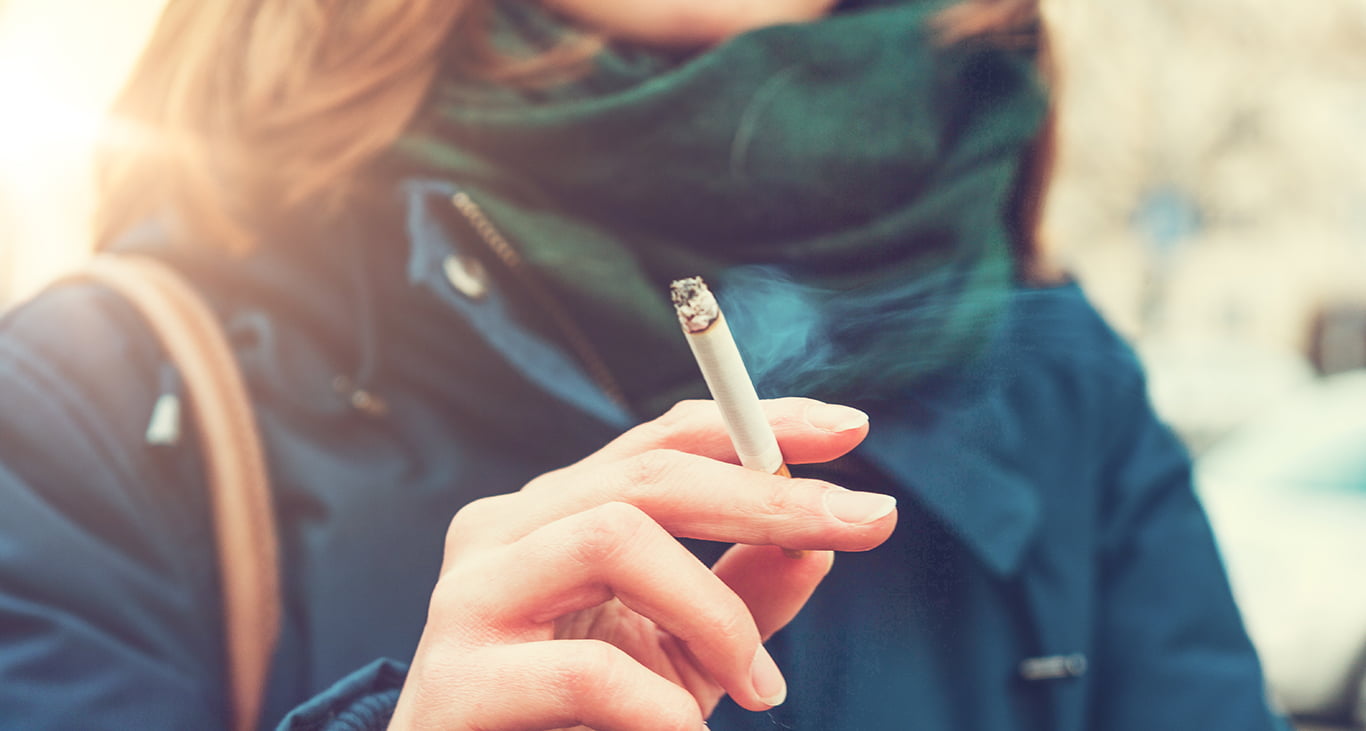 Are Cigarettes a Gateway Drug?

Research shows that alcohol and marijuana can serve as “gateways” to using harder drugs. But there’s another gateway drug that young adults should be aware of: nicotine. Smoking cigarettes or using e-cigarettes in your late teens and early 20s creates changes in the brain and body that can make young people more apt to experiment with other addictive substances. And vaping may make the effects of nicotine even more significant, increasing the risk. Therefore, the effects of vaping need to be considered when answering the question, “Are cigarettes a gateway drug?”

What Is a Gateway Drug?

A gateway drug is any habit-forming substance that makes it easier to form more extreme and dangerous substance use habits—for example, using hard drugs such as cocaine or heroin. Gateway drugs create changes in the brain that make a young adult more susceptible to the effects of other drugs, as well as alcohol.

A study of university students, published in early 2020, found that smokers had higher levels of depression symptoms.

Moreover, young people are more vulnerable to gateway drugs because their brains are still in development. The brain is not fully mature until around the age of 25. Therefore, negative impacts on brain functioning at this stage of life can lead to harmful, long-term consequences, including mental health disorders.

New research points to a clear connection between depression and smoking. A study of university students, published in early 2020, found that smokers had higher levels of depression symptoms. Another study found that the risk of depression was four times higher for heavy smokers compared with those who never smoked.

Fewer young adults are smoking cigarettes than in the past. Since 2005, smoking among all adults has declined—from 20.9 percent to the current 13.7 percent. According to the latest nicotine addiction facts and statistics from the CDC, about eight out of every 100 adults between the ages of 18 and 24 smokes cigarettes.

However, the popularity of e-cigarettes has resulted in an increase in nicotine use among young adults. According to the Monitoring the Future survey, an annual report funded by the National Institute on Drug Abuse, vaping nicotine increased dramatically between 2017 and 2018.

Between those two years, the number of college students who reported vaping nicotine within the previous 30 days increased from 6.1 to 15.5 percent, according to the survey. This was among the largest one-year increases for any substance since the survey began more than 40 years ago.

The Effects of Nicotine on the Brain

The effects of nicotine on the brain include the following:

Are Cigarettes a Gateway Drug?

Due to the effects of nicotine on the brain, smoking cigarettes or using e-cigarettes increases the likelihood of using harder drugs. Therefore, the answer to the question, “Are cigarettes a gateway drug?” is undoubtedly “Yes.” For example, 90 percent of cocaine users between the ages of 18 and 34 started smoking before they began using cocaine.

Researchers have examined neurobiological changes that help explain such statistics. In a study using mice, researchers found that mice who consumed nicotine were much more likely to partake in cocaine. The study authors looked for expression levels in the brain of a gene called FosB, which earlier research had linked to cocaine addiction. After seven days of drinking water dosed with nicotine, the mice showed a 61 percent increase in FosB expression. The study authors believe that these results are similar in humans. Moreover, they extend to other drugs, not just cocaine.

Nicotine alone is addictive—as addictive as heroin and cocaine, according to the National Institutes of Health. However, experts believe that vaping may make it even easier to become addicted to nicotine. Because a single vape pod contains the equivalent of 20 cigarettes’ worth of nicotine, it’s easier to take in more nicotine in a shorter amount of time, with less effort. Moreover, since e-cigarettes don’t have the bad smell and taste of cigarettes, there are fewer negative factors to deter young adults from vaping use and, subsequently, vaping addiction.

A study of university students, published in early 2020, found that smokers had higher levels of depression symptoms.

In addition, vaping has also contributed to the increase in marijuana use among young adults. According to the Monitoring the Future survey, the prevalence of vaping marijuana doubled between 2017 and 2018 among college students, from 5.2 to 10.9 percent; and also increased among young adults, from 6.6 to 9.3 percent.

The most recent and frightening of the vaping health effects is known as E-cigarette or Vaping Product Use-Associated Lung Injury (EVALI). As of early 2020, there were 2,807 reported cases of EVALI in the United States, including 68 deaths.

However, there are also multiple negative health effects of nicotine, the primary substance in both cigarettes and e-cigarettes. Nicotine has been shown to increase the risk of cancer, heart disease, stroke, lung diseases, diabetes, and chronic obstructive pulmonary disease.

In addition, vaping liquids contain additives including propylene glycol and glycerol—toxic chemicals that have been linked to cancer, respiratory disease, and heart disease. Diacetyl, a chemical used to flavor vape juice, may cause a condition called “popcorn lung,” the scarring of the lungs’ smallest airways. In addition, some common chemicals used to flavor vape juice could damage endothelial cells, the cells that line blood vessels and lymph vessels.

Furthermore, the toxic substances in e-cigarette vapor, including nickel, tin, lead, benzene, and formaldehyde, could also increase the risk of cancer over time.

Is Vaping a Gateway Drug?

When asking, “Are cigarettes a gateway drug?,” we must also ask, “Is vaping a gateway drug?” The answer is yes: Like other forms of nicotine use, vaping is a gateway drug, because it primes the brain for more drug use and addiction. Research shows that when young adults use e-cigarettes, there is a significantly greater likelihood that they will also use marijuana, alcohol, and illicit drugs.

Furthermore, vaping marijuana has a stronger effect than smoking a marijuana cigarette. And THC—the psychoactive ingredient in marijuana—can also act as a gateway drug. THC use, like nicotine use, creates changes in the brain, leading to a greater likelihood that a young adult who vapes will try harder drugs down the line.

Vaping marijuana has a stronger effect than smoking a marijuana cigarette. And THC—the psychoactive ingredient in marijuana—can also act as a gateway drug.

However, it’s important to note that brain changes as a result of vaping are not the only factor contributing to substance abuse. Substance abuse is typically a co-occurring mental health disorder with an underlying cause such as depression, trauma, or anxiety. Young adults who vape marijuana, drink to excess, or use hard drugs are in almost all cases using substances in order to self-medicate the pain of a mental health challenge.

Integrated treatment for substance abuse includes both detoxing from the substance and looking at the root causes of this self-destructive behavior. Sustainable recovery from both gateway drugs like nicotine and harder drugs requires addressing the underlying issues, such as trauma and mental health challenges, that are manifesting as a substance abuse disorder.